There are many Mondays over the course of three years’ time. During many of our Monday afternoons, there are words and phrases that have not yet made it into a finished song. I would like to share several of these bits and pieces of stories because they came from the heart of people. I wish to honor each person who took a marker to the page and opened their heart for a moment of vulnerability to send a piece of themselves into the world through the written word. I will continue to add to this page as I find words that are waiting to be lifted into song. Inshallah, may it be so.

You feel the world has touched you because the whole world is there. You know, you get your feet on the ground again. ~ resident from Turkey

We bring our homelands in our hearts. I just wanted my family and I to feel safe in Belgium. We want the war in Syria to end. We want to live here. ~ Jakelin from Palestine

I will just need to be safe

My family, everybody, they were sick from the bombs in Syria

If I had chains on my feet

I thought if I had been alone

I would have written on the wall, wherever I broke the wall

Before I build a wall, I want to ask

Who I was keeping in

And who I was holding back

What if we build a bridge instead?

Then, like water that washes away, it is gone.

Swallowing everything in its path

We are all traveling in this world.

All that will be left in the end is a memory

What is mine and what is yours?

When the whole world is gone.

When I come I need a place

Where are you from? I asked.

Palestina. Gaza. I was in Austria. Now here.

When you say you need a place, is Belgium that place?

All the world is free, he continued. Politics make borders.

The sun is free, he said. Not people. 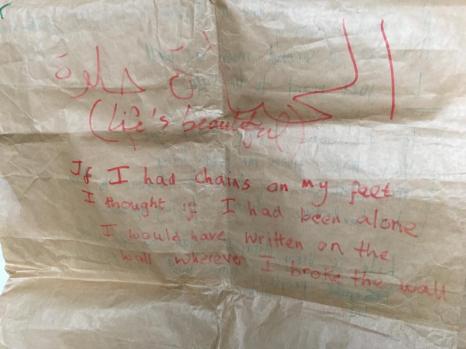 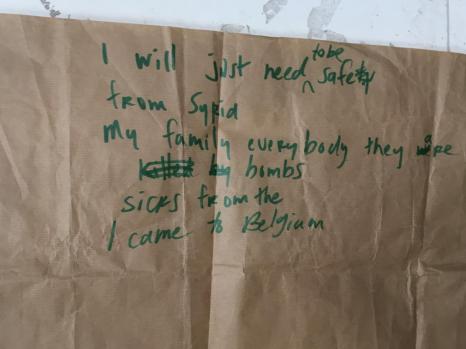 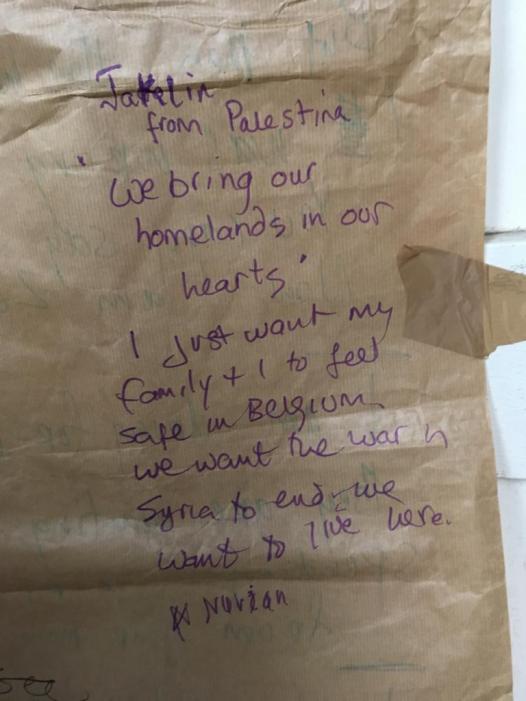