This morning, Atticus and I headed out early (if not bright) to the center of the EU in downtown Brussels. 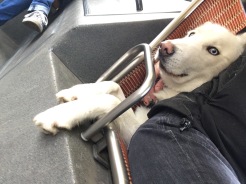 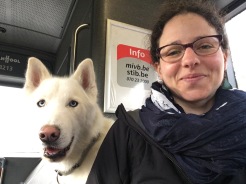 We live on the very outskirts of this international city. When my husband first arrived and was tasked with deciding which commune we might enjoy living in, he chose Boitsfort (strong forest) because he knew that our spiritual health required the presence of trees (and not just those inhibited trees [which I still love because I love all trees], which are trapped in a little square of dirt along a city sidewalk or within the carefully architected and designed city park.

Granted, even the Forêt des Soignes, which is mere feet (and something in meters?) from our front door, was designed by and for people and is a working forest. Regardless of the design, the trees are still trees; the birds are still birds; and the forest is incredibly beautiful and expressive. I find it enchanting in every type of weather.

Less enchanting is the lengthy trek from our quiet corner of Boitsfort in the Coin du Balai to Brussels proper, which requires multiple transfers from bus to metro to tram, etc. and the kind of patience and groundedness I do not possess, though I am working on it.

The trek has become particularly challenging since my husband and I adopted a big white husky with extreme separation anxiety. We have been working up to leaving him for more extended lengths of time, but the hour it takes to get downtown (plus the return trip) would only currently allow me about 15 minutes before having to head back home. Right now, one of us has to be headed home when the other heads out, or I bring BWD (big white dog) along for the adventure.

With my husband out of town for a conference in Iceland, I wasn’t quite sure what to do and thought about not going to the event at all. While I imagined they might think I was a bit off my rocker, I decided to write to the staff at the House of European History to see if they might allow a dog at the event.

While Belgium is quite dog friendly, I will admit that I didn’t have high hopes. Most places that do allow dogs seem to prefer the little ones, and we refer to our husky, Atticus, as BWD for a reason. One staff person responded that it would not be possible for a dog to go into the venue. However, a staff person managing the Facebook page said that one of their colleagues would be happy to hang out with my dog so I could go inside and participate in the event.

The premise of the event: to share a story and object from your experience as a migrant.

Being a wandering soul and a writer of stories and songs, it seemed like a perfect fit. Atticus and I excited the Schumann transit station via an underground elevator, which opened at street level. We walked out into a bustling world of well-dressed Europeans. European flags waved in the wind, and a mural on the side of one building read, “The Future is Europe.” 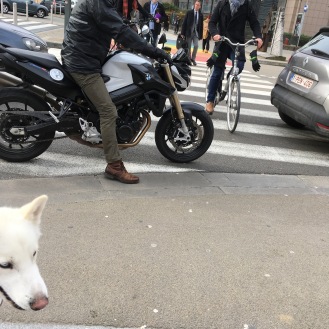 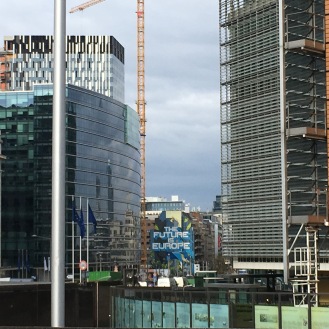 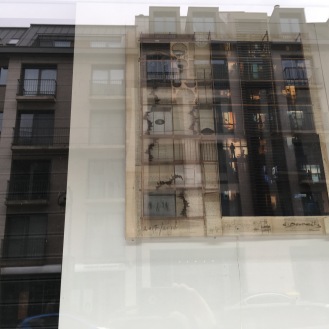 Carrying my worn out ukulele case, which is currently sporting a broken handle, and with frizzy hair waving in the wind, I took out my iPhone to get my bearings and headed in the direction of the event. Our progress was relatively slow, as Atticus insisted on winding circles around me in pursuit of all the best new city smells. 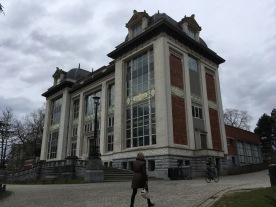 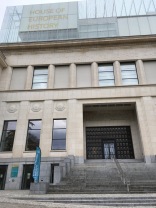 The venue was the House of European History, which was situated in a part of the city I had never explored. It was a really interesting mix of modern and historic buildings, blending past with present with an eye toward the future. We wandered around a bit, staying in close proximity to the main museum while we waited for my fellow volunteer, Sarah Van Hove, to join us.

Atticus was overjoyed to see Sarah, and it was a sweet reunion in front of the museum. 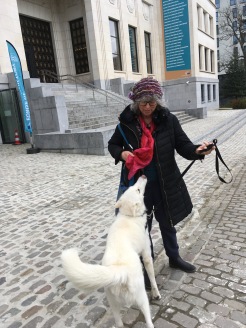 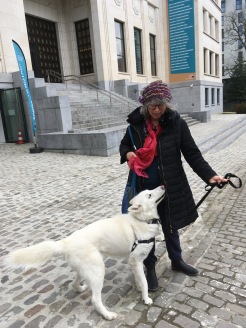 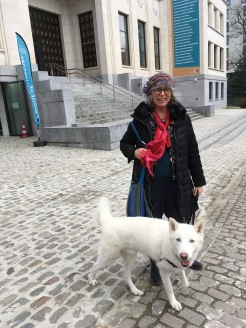 In keeping with my tradition of never doing any one thing in an uncomplicated manner, I inspired some confusion with BWD in tow. However, a staff person eventually came outside, offering to hang out with said dog so that Sarah and I could go inside and participate in the event.

I had no idea what to expect, but just the experience of going into the building was fairly intense. High security, and one of those revolving doors that opened when you placed your feet on the two blue foot(ish)-shaped symbols on the floor. The building itself was quite beautiful and modern on the inside, which I hadn’t been expecting. There were murals painted along the top edge of the high walls, a forest scene with either people are fairies and wolves and fox a plenty.

Sarah and were directed toward the first of several tables, which were setup around the outer edges of the room. We were given a piece of paper to fill out and then taken to another table, where another staff member interviewed us. We set up our objects on the table, and a reporter came over and took photos while we explained how we each came to be in Belgium and working together writing poetry and music with refugees.

Following my interview, I sat with a reporter and told her about the work we do while Sarah finished her interview. We then were taken into the museum proper, where a photographer took photographs of me holding my ukulele in an exhibit devoted to music.

Back in the interview room, we were led to yet another table, where we checked in our objects so photographers could digitize them to add to the collection for the exhibit. Another staff person (there were a lot of staff people!) asked if we wouldn’t mind filling out a survey. We sat at a computer and I did my best to move through the 20 surveys questions, some of which were a bit too fancy for me. One asked us to add little boxes with words onto a grid. My brain automatically shuts off when there are charts and tables with instructions. Hopefully, I did not ruin their statistics.

With about 40 minutes to wait before reclaiming our objects, we decided to go for a little walk in search of a coffee shop. Once back outside, it took us a few minutes to find Atticus, who was out walking with a really sweet fellow who had been texting photographs of him to a colleague. We walked to a lovely coffee shop with cactus lining one of the windows from floor to ceiling. While we warmed up with frothy cappuccinos with hearts, Atticus drank his fill of water and splayed out on the floor. 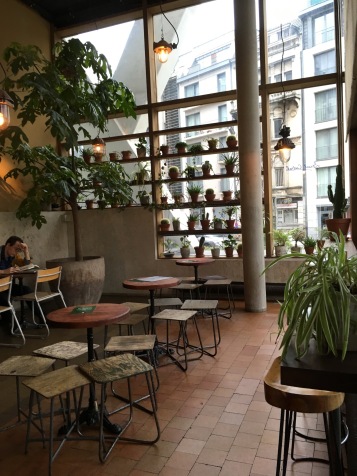 Back at the museum after our wee hot beverage break, we waited for another staff person to come and care for Atticus while we went back in. We were asked if we would like to sing one of our songs so one of the staff could create a film to post to their social media sites. We invited a couple of staff to join us, and Sarah brought out the sheet music while I passed the bag of handheld percussion instruments.

We sang in a hall with high ceilings and incredible acoustics while another staff member and Atticus peaked in through the windows from the outside stairs.

The journey home was a wet one, with a walk followed by a long bus ride. By the time Atticus and I made it home, many hours had passed since our adventure began and we were both exhausted. The rain began to come down in earnest within moments of setting foot safely inside our cozy home in the Coin du Balai. 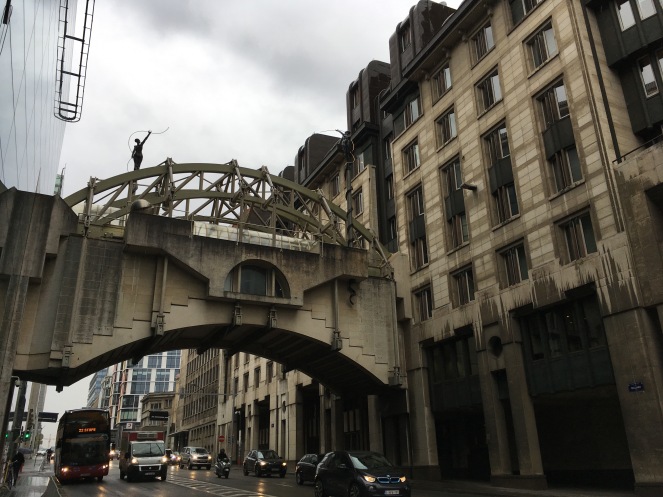 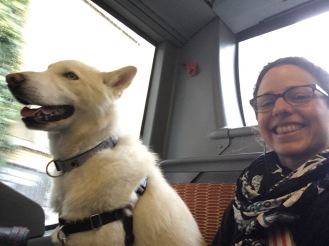 I believe that one of my roles in this life is to create opportunities for people to share their stories and to experience the creative process of shaping their stories into a song. I have found in my own songwriting, as well as the feedback I have received in working with others, that many people believe their life experiences are not interesting enough to warrant becoming a song. I have witnessed the healing and empowerment that happens in discovering that there is beauty and meaning in even the seemingly simplest of stories and hearing a personal story take flight into song.

I am so very thankful to the House of European History and their phenomenal staff for creating an entire event around honoring all migrant’s stories and personal objects. I continue to feel filled with light and buoyant hope in the wake of such a wonderful adventure.

Onward and upward, we go! 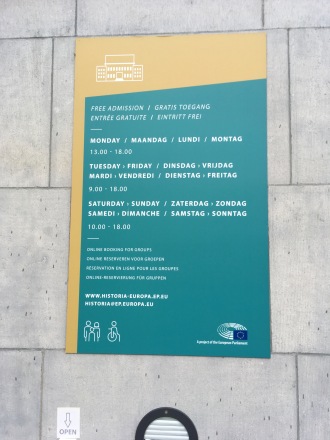 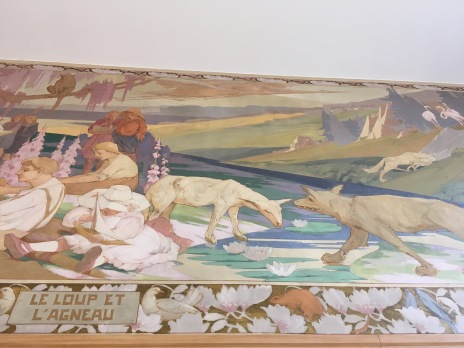 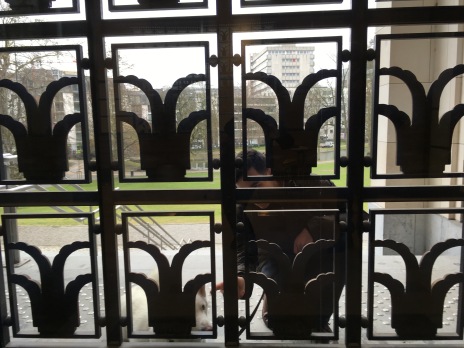 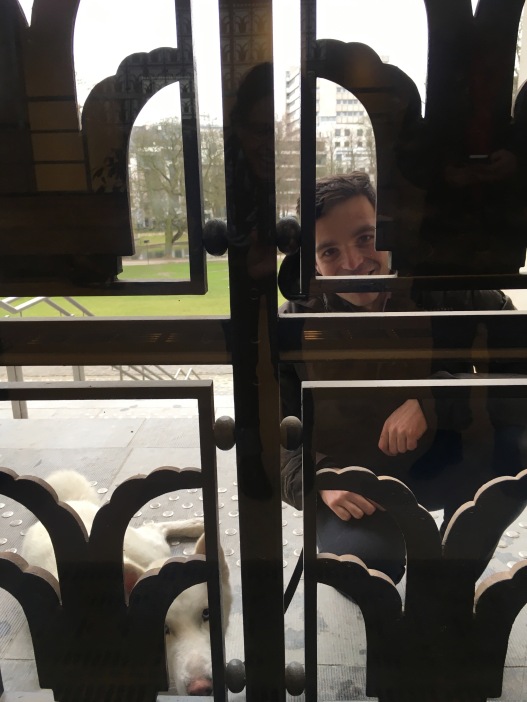 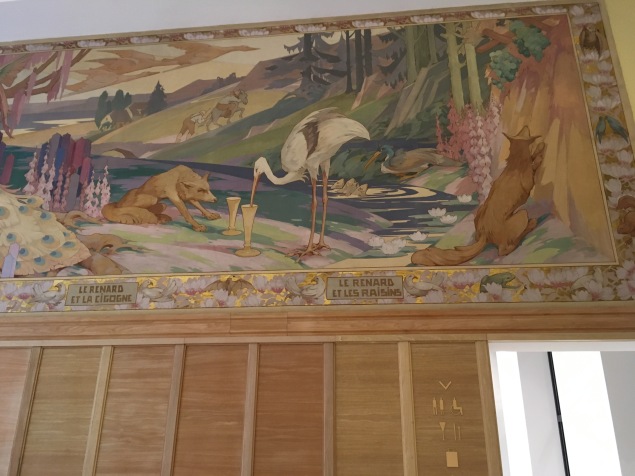