This past Monday was the last day of a three-week visit by my mom and our friend. They traveled to Brussels from the east coast of the United States. From there, we flew to Prague, took the train to Vienna and Budapest, flew the Amsterdam, and took the train back to Brussels.

It was exciting to be able to bring them to Monday songwriting at the asylum center. The sun was shining, and there were even chairs set up in the corridor where we setup our poetry and songwriting station. My mom and our friend sat down, and we were quickly swept up into what turned into a magical afternoon.

We began by hanging up the words to a song we wrote at our last poetry and songwriting session at the center so we could sing for people sitting outside and for passersby. The center gets so many new people every Monday we are there, and several groups walk past us on their orientation tour. We love singing for everyone and welcoming them to Belgium in both spoken word and song.

We sang the song, “Let me be free,” and the magic of music drew people in as it so often does. Several residents wrote words and phrases on the new pieces of paper Sarah posted on the wall. We used Google translate to explain our project and to help people share their ideas in their mother tongue.

One woman wrote the words “life is beautiful” in Arabic.

Another resident from Macedonia wrote these words: 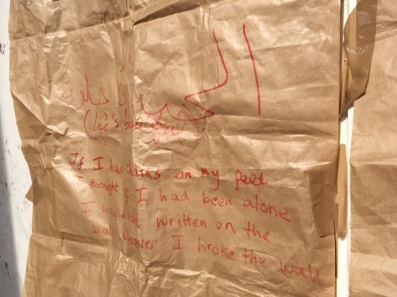 I did not have the chance to ask them to share more of the meaning behind their words because I was swept up in the process of writing the story being shared with me by another resident (they asked me to not share their country or name to protect their family). Their story was a powerful tribute to freedom and independence.

He began with words he wrote on the page:

Nomads
INVENTED
The war machine
However it is stolen 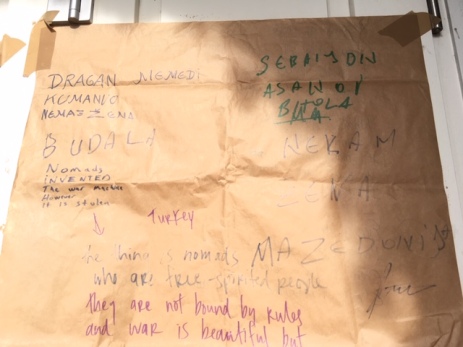 He spoke English very well but asked if I might write while he spoke. I was happy to oblige, and I asked questions along the way to learn more about his thoughts on war and nomads, freedom and protest.

(Nomads) should experiment with their souls and bodies to defy
The conventions
It can apply to you, to me, to everyone

I am here for political reasons

In life, we are bound to death, to diseases
But a world without death and diseases
Is not a world for us

Leave us be the way we are 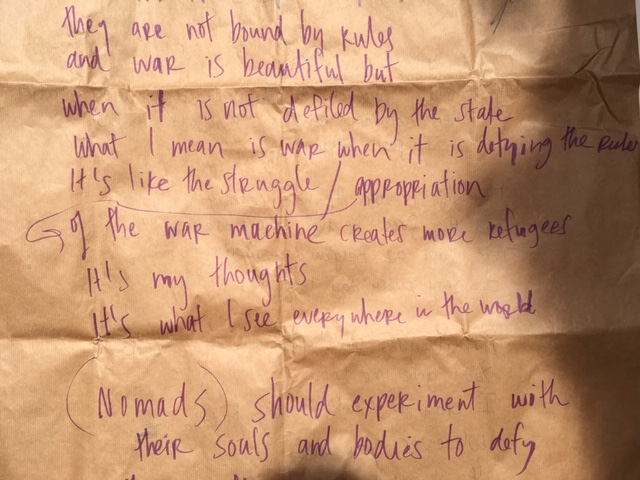 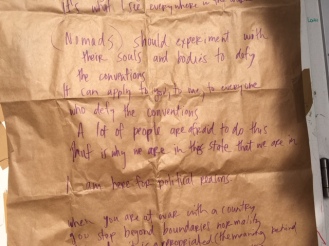 First we often try to shorten the phrases so they are easier to sing. I suggested to the resident that he imagine taking a breath in, singing several words, and exhaling. We only have so much breath to sing so many words. I also explained that even after this process of shaping the story into singable verses and a chorus, the body will often change the words once we begin to sing. Some words flow more readily from the tongue than others, and our bodies seem to instinctively know and make changes as we sing.

Leave us be the way we are

The resident who shared his story told me he did not have a good singing voice. I asked if he might try singing a few words, any words on the page that spoke to him. I offered to strum some chords. He was reticent and asked if I would sing something to help give him ideas.

So I sang one line and then continued strumming. His voice picked up where mine left off, and soon we were singing together a haunting melody to match the melancholy from the story.

I asked my mom’s friend if she would make a video, being careful to focus only on the pages taped to the doorframe so all residents’ identities would be kept anonymous.

Instruments were passed around, and we all sang together.

In these moments, nothing else in the world exists but our voices, singing together.

As we were shaping the story into a song, I was also going back and forth with another resident to help her translate her thoughts from Arabic into English, using Google translate on my iPhone. We wrote her words on the page and said we would be able to write a song the following week and hoped she would be able to join us.

I wanted to be able to also write a song from the words of those residents who had written shorter phrases here and there on the pages we posted while also writing a song about the story of nomads and war. In two short hours, I was only able to do so much and I wish I could do more than make promises. The phrase InshAllah (God willing) is shared often at the center. No one knows if they will be there in a week’s time or somewhere else. None of us is in control of when the residents might be moved and whether or not they will be granted asylum in Belgium. We can only share our hopes for their safety and we can continue to return, every Monday afternoon, to offer poetry and songwriting. InshAllah. 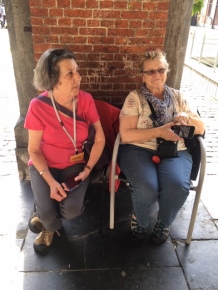 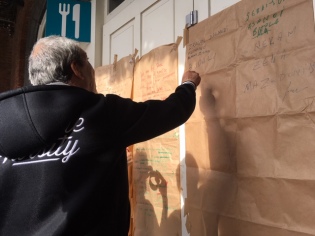 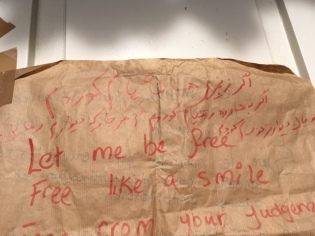 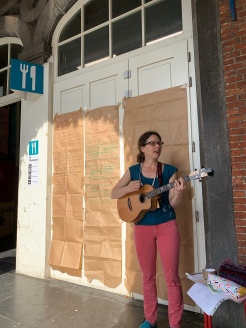 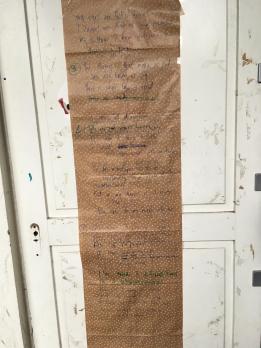