Our 28 October Monday afternoon poetry and songwriting session at the refugee center was intense and deeply meaningful. It was a moment where many people came together and expressed the joy of being able to share a creative moment in a world of uncertainty.

We began as usual by cleaning up our poetry wall. We posted the lyrics to songs we wrote with residents at the story over our nearly three years working together on Monday afternoons from 2-4pm, rain, shine, and everything else Brussels has to offer over the course of four seasons.

A man from Afghanistan came over, and Sarah began talking with him about what we do. He was interested in one of the poems posted on the wall and wanted to write something similar rather than sharing his own story. They sat on the bench and began working together.

Another resident came over, and I asked if he might like to share his story. I wrote his words as he spoke, filling two pages in a very short time. He began with a comparison of what he has lost in Yemen—I lost my life there—with how he felt about Belgium: What I find here is that people understand human rights.

He continued, talking about his first time in Belgium, then the time he spent in Spain, and his second time in Belgium. He spoke about his life in Yemen and how when he was young (14; he is now only 20) he believed life was full of hope and promise.

He told me that he used to try to motivate his friends by saying, Nothing is impossible. There is no elevator to success. You have to take the stairs.

This was before the war, before bombs broke both of his father’s arms and left his mother’s body badly broken as well.

Before the war in Yemen, he had dreams of doing something meaningful with his life. Now he is alone in a foreign land.

Before the war came, I was working with my family. It was a hard life, but at least we felt safe.

But then the war came and destroyed everything

I was wrong this wasn’t true

You can say life proved that

Now, it has been two years since he left his father and mother in Yemen in search of a country that will grant him asylum so he can bring them to safety. He seems to be stuck in bureaucratic refugee red tape between Spain and Belgium.

He told me that in Spain the police told him to go to hell, but in Belgium the first policeman he met gave him directions to Petit-Chateau and told him, Welcome.

In Belgium, they gave me everything, he said. The clothes on his body, the shoes on his feet, even his glasses.

When I asked him what he would say to Belgium, he responded:

To Belgium, I say thank you

You have given me everything

My clothes, my shoes, a chance to live

I added these words to the page.

I am doing for my mom and dad

They are waiting for me

Spending two years out of your country far

From your mom and dad is hard

Life is very difficult when you are alone

He repeated many times that he wanted to give back to Belgium and not to see be seen as someone who came here just to take.

I didn’t come to Belgium to take

I came to give as well

I stood up and looked back at this winding story. I thought about what it was like being 20. When I was his age, I felt like an adult. Now 38, 20 seemed very young indeed, far too young to be burdened by the weight of such responsibility as the safety and survival of your parents. When I asked if he was able to contact them, he said that it could be very difficult because the Internet and cell signals were not always reliable.

When I studied in Africa for six months during a study abroad semester in my third year of undergraduate school, my parents called me once a week. The greatest challenge with communication took place on their initial call to the phone company to figure out the best phone plan to call me. The customer service person they spoke with did not recognize the country in Africa where I would be living.

Do you mean Bali? she had asked when they said I would be going to Mali.

Basic ignorance of global geography was the greatest challenge for my own family’s ability to communicate across a great distance.

Here was a young man who was up against far greater odds in his desire to reunite his family in a safe place.

I explained the way we shaped a poem into a song, looking for the universal message or emotion, which would become a chorus. This way, a person living far away could listen to the song and make a personal connection to him even though they had never met.

They may not have had a similar experience and hopefully they have not lived through a war, but they may have had moments in their life when they felt a kinship to the desire to be treated like a human being.

In the songwriting process, I usually ask the person who has shared their story to sing some of the words. I offer to strum some chords because I have found that it can be helpful for a person to have some music to give them ideas for notes to sing. It also seems like it may be a bit less scary to try singing when there is musical accompaniment.

I asked the young man if he might like to try singing, but he was quite overwhelmed from sharing his story. I was flustered as well. It is challenging to write a song, any song, in a short time, and I often feel even greater pressure for a story with intense emotion such as this. There was so much weight on this resident’s shoulders; how could I possibly create a song worthy of honoring his life journey?

Thankfully, Sarah stepped in and suggested we try to write a short chorus that we could all sing. No need to write the entire song this afternoon.

I suggested two themes that seemed to be very poignant and powerful in his story and asked if he agreed.

The desire to give back

The resident agreed, and I looked through the text to find his original words. Sarah wrote as I spoke:

I don’t come to take

I come to give

Then Sarah suggested a possible second stanza for the verse:

I don’t come to die

I come to live

Give me a chance to give

I liked the play on the words live and give, but the line “I don’t come to die” felt too strong. I didn’t want to add any more mortality to a song about war.

The resident began speaking and we wrote his words:

I run away from war

Not to have a war

We worked with his words and came up with the following:

I ran away from war

Looking back at the first stanza, we tried the play on the words live and give a second time:

I don’t come to take

I come to live

Give me a chance to give

I ran away from war

It was this chorus that we sang together several times. As we sang, other residents came to listen. This happens often at the center. The music is a kind of magnet, drawing people in. we handed out instruments to those who wished to play. Others formed a half moon around us.

When we had finished singing and began packing up to leave, I thanked the young man for his courage in sharing his story and in coming to Belgium. He thanked us to coming to the center to hear his story. Another resident from Turkey offered thanks as well. We said that it was we who were thankful to all of them.

It was an emotional afternoon and a poignant one. We go to the center every Monday because we believe it is important to be there in support and to bring poetry and music into the world. Though we don’t expect any recompense or recognition for our time, we do sometimes wonder if anyone would notice if we were not there. These moments are very meaningful affirmation that the work we are doing is indeed helping to make the world a better place.

I often feel like what we do is so little in comparison to what these refugees have experienced and in terms of what they are up against. If only we could do. Perhaps, we are doing exactly what needs to be done, inviting people to join together, sharing stories that speak of the true human experience and creating something beautiful from moments of sadness.

Every person deserves the right to feel human and a chance to live in peace, joy, and safety. In asking a person to share their story, we give them back their humanity. We honor their experiences. In shaping their story into a song, we also offer the chance to process difficult emotions. We create a sanctuary, if only for a short time. Our work captures the authentic human experience in a creative way that we hope will speak to people around the world. I believe that art can transcend fear and hate in exchange for empathy and solidarity. 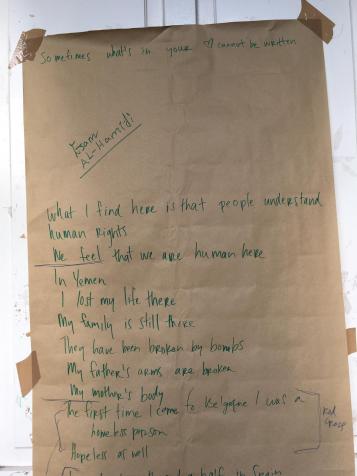 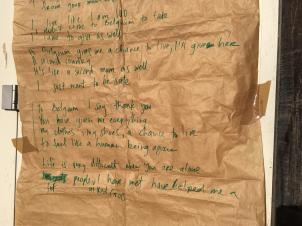 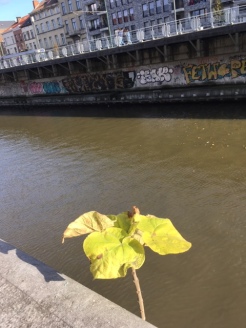 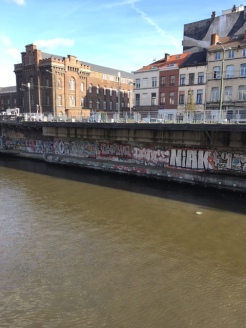 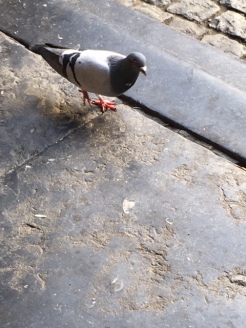 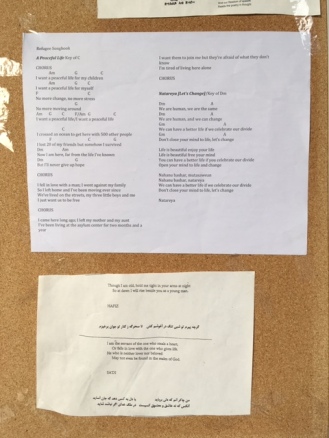 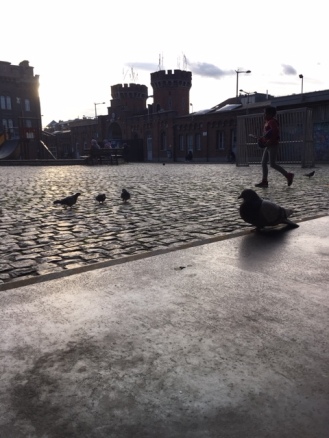