I recently published a piece about the importance of recognizing and honoring individuals whose ideas have inspired your own work in order to ensure they receive acknowledgment for their hard work and innovation. I wrote mainly from the creative and academic perspective, but this concept certainly extends to all realms of innovation and discovery. Since publishing this piece, I have been reflecting on my own work in the creative realm of poetry and songwriting in Belgium.

For just over a year now, I have been working on an ongoing poetry and songwriting project with the residents of the Fedasil Petit-Château Klein Kasteeltje (hereafter referred to as PC) refugee asylum center in Brussels. The poetry and songs I have written have all been in creative collaboration with the men and women living at the center, who have shared bits and pieces of their experiences, hopes, dreams, and frustrations in stories, words, and melodies.

Each week is a completely new, unique experience in songwriting. The two hours that I spent with poet Sarah Van Hove, who has been volunteering at the center to lead poetry workshops for more than five years, become a kind of performance art improve event. We post a piece of paper on the wall that runs around the first outdoor courtyard at the center, and we invite passersby to write words and phrases. Often, Sarah will inspire a theme by writing a line or two from a poem or an exposition she has seen.

There is a lot of turnover at the center. Recently, the staff person who had watched over us the most closely and offered ongoing support left for a new job, so we have been treading water a bit. No more hot coffee and tea for everyone who participates (and we are out there in every kind of weather). This past Monday, one of the staff asked Sarah if we could organize our many pages of poetry. Granted, the work of a volunteer is perhaps not as that of paid staff, who have so enough work piled high on their own plate to have time for us. However, it is nice to feel that others believe in the importance of the work that we do. While the staff may not have the time or impetus to offer support or encouragement, we find support in the camaraderie that we have developed with center residents. People at the center are busy with appointments, language lessons, finding work, managing their own families in a life of limbo in a foreign land. Needless to say, some days we get very few participants. However, our presence has become so regular that people stop to greet us and offer thanks. In conversations, we have decided that even if no artwork is created, we are offering a service just by showing up each week. It’s possible that we may be the one unchanging element of life for many of the people at PC.

As it has been particularly cold these past few weeks, I have started to bring hot tea in a thermos to share. We stand outside, communing with the pigeons, who are far hardier than most beings in the world. Sarah always bring something sweet and yummy. It gets dangerous she brings gummy candy, one of two treats that break down my stalwart defenses (homemade popcorn being the other).

The past few weeks, we have been graced with the familiar smile of a resident who has become a friend over the past year and whose spoken words have been shaped into several songs, some finished and others still in the works.

This friendship is poignant for many reasons, one of them being that we have written songs in the dark times and the light. In the song I am the Change, he shared the following line, filled with despair:

I came here to find humanity

Even in the sadness of these words, the emotions that come from these songs also offer hope and love. The title itself betrays a deep sense that there is light outlining the dark, finding its way in through the cracks of melancholy.

It was with great joy that we celebrated the arrival of our friend’s sister this past fall and then more joy with the news he had been granted official asylum in Belgium and could thus begin the process of repatriation for his wife and daughter. The refugee center has many residents, many of them single men who have been living there and waiting for months and years for this kind of news. Many do not receive it.

For us, the center has a kind of beauty to it with its brick walls and grit. It is one of (if not the) oldest center in Brussels, once housing soldiers for the Belgian military. For the residents, the center inspires a spectrum of emotions. Some have likened it to a kind of prison, writing these words on the paper we have taped to the brick wall. Some residents wish to return home, but it seems that most hope to stay.

Lines from a song written 24 April this past year share this unending hope for better times:

We are waiting for a new life

We are looking for some hope

We are living under the same sky

With a different view 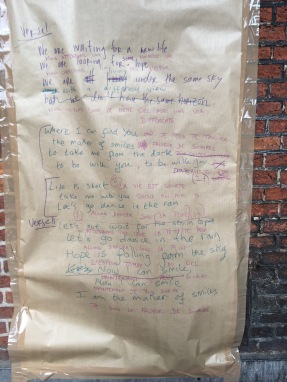 This phrase was translated into French as well, and we sang through both versions several times. With residents from around the world, poems are often written in Arabic, Farsi, Dari, and many other languages. Participants engage in often-heated debates about translation and word choice. I have learned several words in different languages, though my pronunciation of Arabic is really terrible. There is a kind of ch/h sound that is incredibly difficult to create if Arabic is not one’s native tongue. I have also come to appreciate that there is poetic meaning that is often lost in translation from one language to another, but we do our best.

It is heartwarming to witness the dialogue that ensues with each poem and song that is written. People become intimately entwined in the process of creation. By the time I have passed around my travel sack of handheld percussion instruments and we have begun to sing, we have also become a community, however transient.

The work of an artist can be lonely. I have a hard time motivating myself to practice on a regular basis, if at all. In two hours of collaborative creation, I can feel my passion renewed. A couple of weeks ago, I mentioned how challenging it can be to step out of the current of humanity and to walk a different path. Sarah said that there are more people than one would think who are creating their own path. Perhaps, it is in stepping onto our own path that brings us into the company of others doing the same.

Certainly, stepping out of the current of songwriting for financial gain in order to write poetry and music with those seeking asylum has brought me to a crossroads with people from all over the world, who have turned their worlds upside down to create their own path toward freedom.

Shakespeare wrote, “A rose by any other name would smell as sweet.” While I do not share the identities of the people whose words shape my own being so profoundly, I honor each and every one by writing about the process of creating music from their words and by singing their songs.