It has been bitterly cold in Brussels. Having lived in Alaska and New England, I know how to endure winter. Inclement weather does not typically keep me indoors. However, when my husband and I moved to Belgium, I left behind my lined winter boots. Along with most of my other belongings, they are packed snuggly into large, plastic bins in our garage in Arizona. I think I was not anticipating that Belgium would be particularly cold in the winter. I was also only packing as much as I could fit into a couple of suitcases. Remembering how challenging it was to find familiar pharmaceuticals and toiletries during my time working as an English teaching assistant in France more than a decade ago, I packed a traveling pharmacy into my bags. Upon arrival, I realized how ridiculous this choice had been. There are plenty of cotton face pads, cold and flu medication, and cutips to be found in our corner of Brussels. However, it brought me comfort when I was preparing to move to a foreign land to have the things I deemed necessary at the time. Having been well-trained by my mother, I am always prepared for minor emergencies everywhere I am the one people laugh at but then go to when they need something. I have the bandaids, Kleenex, hand wipes, ibuprofen, earplugs, etc.

Having spent over a year volunteering at a refugee asylum center in Brussels, when I think back on the process we went through prior to moving to Belgium I realize just how privileged we were. We went through all of the steps of applying for a visa. We complained about it because it was fairly outrageous, but we managed. We paid a pretty penny for our visas, but we had money saved up. We sent our dog to my parents’ house for a puppy vacation (that is ongoing), but when I insisted that I could not part with my two cats as well, my husband said ok (so long as I figured out how to bring them with us).

Getting to Belgium was a pain in the butt and bank account, but we had choices. We took our time packing up our house, getting it rented out, and heading east across a continent and over. This privilege was not extended to the majority of people I meet each week at the asylum center. Many were musicians, but they couldn’t bring their beloved instruments. They left nearly everything behind, along with their personal belongings and pets.

When I first adopted a dog, a big, white husky from Tehran, my appreciation for my privilege continued. By the time I had paid this dog’s way to the EU, I might as well have adopted a pure bred puppy. When he first arrived, he understood only Farsi, so I brought him with me to the center. He lay quietly at my side, already seeming to sense that I would keep him near me. When a center resident from Iran came by and spoke Farsi with him, his entire being came alive. He jumped into the man’s arms in what seemed like a gesture of knowing and joy. 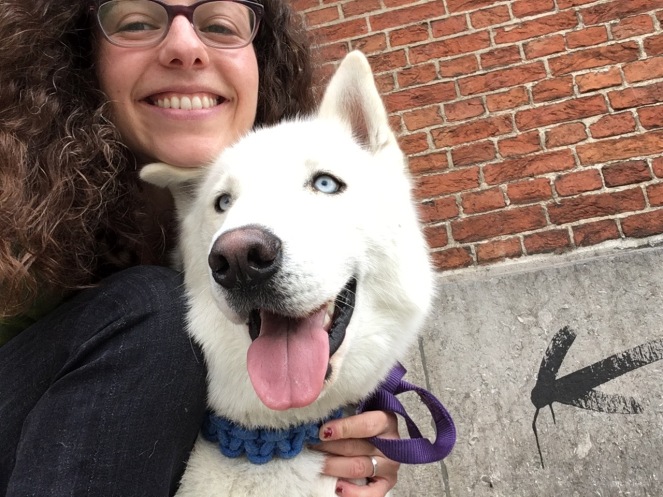 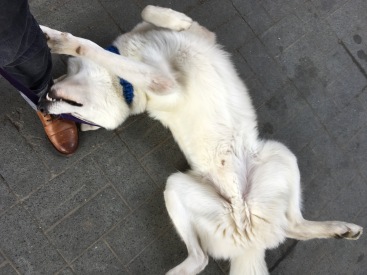 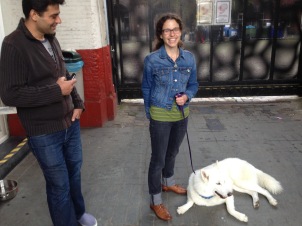 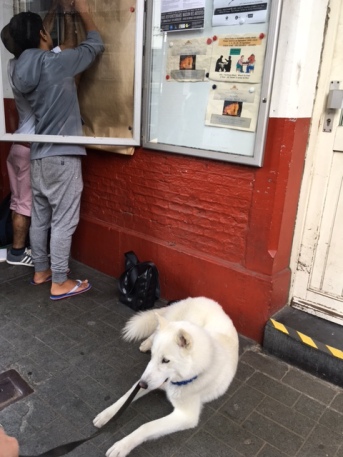 My husky traveled in a kennel and was disoriented and afraid of being alone, not knowing where he was going or what had happened to the humans he had known. For Atticus the dog to become a resident of Belgium he needed only for me to take him to the vet and request a Pet Passport.

It is not so simple or straightforward for the people I meet at the asylum center. Many have been waiting months, even years, to find out if they will be able to stay. Their lives are not completely their own until they are approved by the government. They go through multiple interviews and much waiting in limbo.

Many of the people living at the center are from Syria, and the stories they share offer some serious perspective to my very first world complaints.

According to The New York Times,

“There is no end to the horror in Syria. The U.N. secretary general, António Guterres, appealed for a cease-fire decision to be respected to allow relief aid for 400,000 people trapped in eastern Ghouta, a besieged suburb of Damascus. One resident called it ‘an uninhabitable hell.’”

One of our new poetry and songwriting participant friends, who is from Syria, shared the story of a nine year old who had been killed by bombs.

She never lived to tell you this

Killed by the bombs of Saraqib

She never knew what they were fighting for

Another poetry and songwriting regular joined us and wrote a stanza in English that he translated from his native tongue of Farsi:

Come back, come back, everything you are

Muslim, Christian, whatever you are

This door is not for despair

A hundred times you broke your promise

As we sing, we make adjustments. The last line was a fine phrase, but the stanza felt like it could end after Saraqib. I also found myself wanting to repeat the line Remember Rose, she’s nine years old.

So the stanza became:

She never lived to tell you this

Killed by the bombs of Saraqib.

And the second stanza:

Come back, come back, everything you are

Muslim, Christian, whatever you are

If you broke your promise 100 times

Come back, I’ll be there

I passed around my traveling sack of handheld rhythm instruments, and we sang through the song several times. At the end of the song, I asked for the Farsi word for “Come back,” which I learned was “Baza,” and we chanted the phrase:

At the end of the third repetition, I added the word Shahed (the little girl’s name). 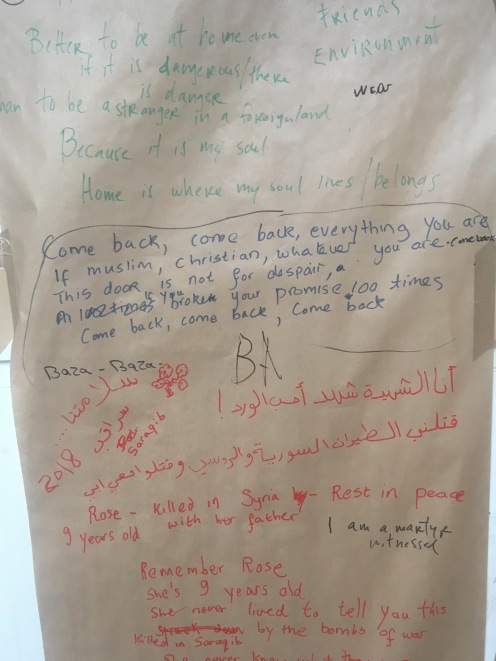 We had created a song where no song had existed before, combining Arabic, Farsi, and English words, culture, and experiences.

When I first started volunteering at the center, I was the only person suggesting small changes, ways to help with rhythm, cadence, and flow. I would explain my reasons for these changes and make sure everyone was comfortable with the change. For example, some words are easier to sing than others, and some phrases seem to want to be repeated. Fewer words can offer an easier flow, especially for not running out of air. Taking out some of the phrasing also offers allows the listener to fill in some of the meaning on their own.

Now, Sarah and the residents all offer ideas, and we dialogue as we go, crossing words out, drawing arrows, and numbering lines to help us remember when we decide to change the order of phrasing. We walk up to the page, marker in hand, and note the changes. The page can get pretty chaotic after a while, but there is collaboration and a performance in the design.