I recently wrote a song from my friend Mohammed’s story. The song was derived from a very small portion of the much longer story. We filled several large sheets of paper before beginning to work on the chorus, and it was only a few phrases that made it from the story to the finished song.

Just as a song often reveals itself in stages, so too can the process of reflection. Over the week since writing the song, I have reflected further on the process and also received comments from people, which have reminded me of previous experiences in songwriting.

I remembered the moment I let go of my desire to write verses from the spoken story and to follow the natural trajectory of the song as it revealed itself to the storyteller and me. I remembered conversations with my music partner, Malcolm, when we would discuss a particular song we were working on and how difficult it could be to have ideas for the composition process (melodies, lyrics, rhythm, etc.) and to let them go if they did not speak to the storyteller. We would talk about how the song reveals itself—with a word or phrase or arc of notes—and it is our job to notice these often-subtle gifts and to guide the creative process only in so much as it honors the desires of the storyteller and the song.

There is a fine line between guiding and leading the creative process. Learning how to ride the creative wave fits well with my life path of learning not to hold on too tightly, to plans, material possessions, or ideas of how something will work out.

For me, songwriting is a way of dancing with the chaos of the universe. My life practice is to find ways to create equanimity in a world over which I have very little control. Having grown up studying music in the classical tradition, I did not have to worry about chaos. Everything was decided for me already. My instruction was to learn to perform and interpret the piece exactly as it had been written, often several hundred years prior, with very little deviation from the original composer’s agenda.

In the classical music realm, at the least the one in which I was raised, there was little room for creativity and personal expression. I was always told that I was musical (for better and for worse). Depending on the person offering the feedback, it could be taken as a compliment or a critique of my musical abilities and expression.

I dipped my musical toes into the improvisational world of jazz music for a couple of years in high school, and it was terrifying. The experience of having no written script tipped the balance toward panic and anxiety. I was unprepared and uncertain of what to do, having always been given the answers in the past, and my foray into the unknown did not last long.

While I found the classical world inhibiting, the jazz world was the opposite extreme. I simply was not prepared to create melodies out of thin air. Songwriting from people’s stories seems to have become a happy medium between these two extremes. I have a context within which to work (people’s spoken words) and an equation to follow (probable chords to set to the melodies we create together).

What I have discovered in songwriting from stories, particularly in collaboration with other people, is that the entire process is a community experience. Everyone participates, sharing ideas, words, and sometimes melodies (often people are afraid to sing for fear of not having a “good” voice).

The feeling of not being alone in creating a piece of music is incredibly comforting. Sure, I feel the pressure of creating something beautiful and meaningful in my role as the guide, but I also have learned how to take a deep breath, let go of my fears, and trust the process.

I may never write a hit song, but this is less important to me than the act of creation itself. For example, I had not planned to visit the refugee center a week ago. However, when a friend asked if her son might be able to join me, I decided to go. There is always the feeling of the unknown and the question of whether I will succeed, but I seem to have learned to focus less and less on the latter (and the subsequent doubts and fears it stirs up). Without fail, my entire being shifts in a positive way from every songwriting experience. I marvel at the fact that a new song exists in the world that could easily have remained hidden had I chosen to stay at home.

This new song is no different. When my fellow volunteer, Sarah, her daughter, our friend, Mohammed, and his friend came out to my husband and my house in Boitsfort for dinner this past Friday evening, posted the song sheet on the sliding door, and sang together on the back terrace in the gathering dusk.

Mohammed’s friend said that the experience of listening to me sing, especially the words of his native language Arabic, was soothing and calming. We shared food and conversation, and songs and experiences from our different cultures and lives in Palestine, Gaza, Belgium, Scotland, and the United States.

We lived and breathed the meaning from the simple yet so very complex words of the song:

We are human, we are the same

We are human, but we can change

We can have a better life if we celebrate our divide

Don’t close your mind to life

Life is beautiful, enjoy your life

Life is beautiful, free your mind

You can have a better life if you celebrate our divide

Open your mind to life

We can have a better life, if we celebrate our divide

Don’t close your mind to life 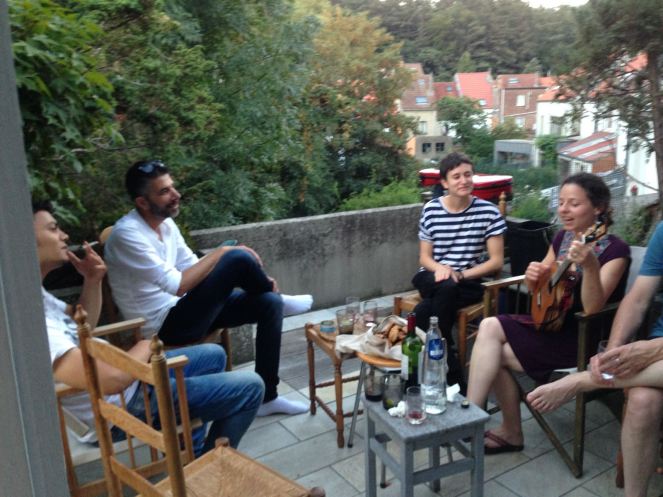 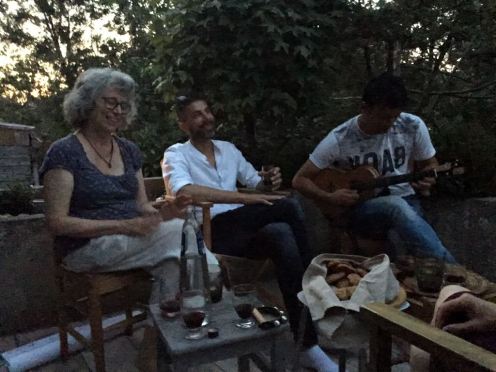