I am often alarmed at the violent nature of enmity with which people respond to other beings. I recently posted a photograph of an enormous spider, which had bitten me when I had put my arm into my jacket sleeve, where it had been quietly minding its own business. At shaken as I was by the experience, the poor thing must have been terrified. I am not a very big human, but in comparison to a spider I am a giant.

To be fair, I did receive a few responses in support of the spider, but there were others that suggested that I nuke the spider or kill it in some horrible way.

It worries me that we can express such passionate hatred for the many beings with which we share this world. In my experience, there are certain beings that take an extra beating from their human neighbors. I remember when my husband and I were getting ready to de-plane after a trip for one of his conferences. The man across the aisle from me was wearing a black t-shirt with the text, “KILL ALL PIGEONS” in white capital letters. I found it really violent and shocking, though no one else seemed too shaken, and I asked him about it. I spoke in support of the pigeon, so often denigrated and thought of as dirty, a rat with wings. (Rats are incredibly intelligent and kind beings, I will add as a side note.)

If history can tell us anything, it is that these feelings of hatred and violence toward beyond human beings can readily transfer to our own species. I think this is one reason I find these expressions so disturbing.

I was reminded of the beauty and metaphor that is the Rock Dove (aka, the city pigeon) this afternoon at Petit-Château, when I met my dear volunteer partner, Sarah, after our summer pause. Sarah spends the summer at their home on the Isle of Skye in her home country of Scotland. Whenever she returns to Brussels after a visit to Scotland, she brings me yummy treats! I spent the summer in a steamy, humid Brussels, reflecting on songwriting, music, yoga, life in a foreign country, and so many of the deeper questions of life and what I want to do with mine.

Each visit to the refugee center reminds me that the world needs more poetry and music. The world also could benefit from more empathy and understanding, and I believe that I can create space for these emotions through the writing of songs from stories and the sharing of those songs with as many people as possible.

There was the usual bit of organized chaos at the center, which seems to be in constant transition and flux. We eventually found the new office space for the bureau where the staff who remain continue their work in what seem to be increasingly strained, stressful conditions. Hearing about the changes and the uncertainty of their own future positions, I was reminded to be thankful for the independence I possess as a volunteer. True, I haven’t seen a weekly paycheck since I left my permanent government job with the National Park Service. However I have had the freedom to imagine the ways I might bring music into the world and to pursue them without requiring permission beyond the ok to volunteer at an asylum center.

Sarah and I returned to our usual spot, and we began chatting with a mother and her children who had only just arrived from Eritrea five days earlier. Sarah has a gift for drawing people in, even those were are very reticent to join our session. She brought out her small notebook, turned to a page with several Eritrean words, and shared the words she knew. She asked the mother if she would find out what her children might like to write a song about.

Belgium? Eritrea? Each suggestion sent them giggling and turning away in shyness.

What is your favorite animal?

Shall we write a song about a cow then?

And so it began. I dashed off after the staff person I had spotted in an attempt to be able to visit the toilet, which is always a challenge because they are locked. Volunteers are not given a key, and after the 45 minutes to an hour trip from Boitsfort to the center, my thimble bladder is already full to bursting.

Not five minutes later upon my return, I found Sarah alone once again.

Have they gone already? I asked, disappointed.

Yes, they had a meeting, she said. But I began a poem about a bird with a broken wing, inspired by this pigeon.

I have shared my admiration for the pigeon with Sarah, along with my belief that the pigeon is a metaphor for those beings that are so easily criticized and vilified. The city pigeon struggles to survive in a world that is hell bent against it. I have seen pigeons with knobby feet, hobbling around in search of food. They are survivors in a difficult reality. People kick them, cars hit them, people threaten to exterminate them. They are not beloved. They are not wanted. They are found everywhere yet belong nowhere. Pigeons are readily “othered” and considered undesirable and dirty simply because they manage to survive in dirty, unpleasant conditions that no person would wish to live in.

How different is a pigeon from a homeless person or a refugee, trying desperately to survive and find a place to call home?

For a pigeon, a broken leg can spell the end. I watched this pigeon, eating crumbs and hopping about as it carried on its way. No complaints. Just a desire to survive. Completely in the moment.

And what else is there?

I am a bird with a broken wing

But I still know how to sing

What if we add, Nobody likes me, nobody loves me, I suggested.

We then began waxing poetic, thinking about how any moment could be the last for a wild animal, particularly a bird living in a dangerous city.

But still I live every day

As if it’s all I have

We mused and spoke about the pigeon and life.

It’s true, Sarah said. All we have is this moment.

So the poem continued,

All I have is this moment

All I have is this time

There was a brief questioning over whether we should write “the moment” or “this moment.”

Whatever we choose, it may change when we sing anyway, I said. Let’s try this to begin with.

And then what if we write, We are not so different, you and I.

Should we finish there, Sarah asked? Or write another line?

What if we repeat this pattern of the “All I have is this moment” but with slightly different words? Like, “Let us share this moment, let us share this time.” And then we could end with the same line, “We are not so different you and I.” Have a repeat pattern makes it easier for people to sing.

Our small but poignant poem written, we decided to try to try to create a short song from the words before I had to leave to rescue my dog, who was home alone.

I began plucking a few chords, trying different patterns and wondering if a melody might present itself.

Then, in the mysterious tradition of the creative process, a melody came forth and we sang.

As we sang, the lyrics changed and Sarah made corrections to the page.

We cut out phrases, making the song a bit more succinct and with fewer words, which tends to be easier to sing, especially if English is not your mother tongue.

A man came over, and Sarah drew him in despite his insistence that he did not speak English very well.

We will sing the song for you, we told him, and we did.

He then told us about how everywhere he went he noticed people’s hair because he was a barber.

You are a singer, he said.

So I hear music in people’s words, I said.

How are able to do it? he asked.

Practice, I said. And I don’t always know if I will be able to write a song, but I still try.

Another fellow joined us. He was very reticent to sing, especially when he looked at our page and saw what seemed like a children’s song about barnyard animals.

I passed around the rhythm instruments, and we all sang or created music with an egg shaker or mini tambourine.

At the end, our new friend agreed that it was a nice song after all. They said they would come to see us the following Monday, and we spoke after, hoping they would. It’s always a bit of a mystery whether we will see the same people a second time, but we always hope.

As I walked over to put my ukulele in its case, I heard Sarah talking with one of the residents who had joined us in song.

We are all in Belgium. We are all away from our home. All of us.

As we walked across the courtyard on our way out of the center, we spoke about the importance of perspective and being in the moment.

Because really, we are not so different from the pigeon, all trying to survive. In every Buddhist text I have read, they emphasize the idea that to be happy in life we must be fully present, to appreciate each moment.

It’s true. This man could have shared all that he lost and had to give up when he left Eritrea. Instead, he spoke of all that he had gained by the generosity of kind people in Belgium, who had given him Colgate and shampoo.

I think this song is a metaphor for our time at Petit-Château, she continued. All we have is a moment with the people here each week.

And we can write a beautiful song with that moment that did not exist before!

Perspective is everything, and each week my perspective gets a reboot to what is truly important. Empathy, love, poetry, and song. 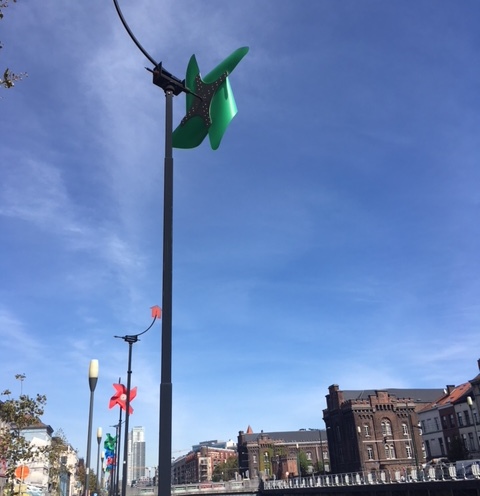 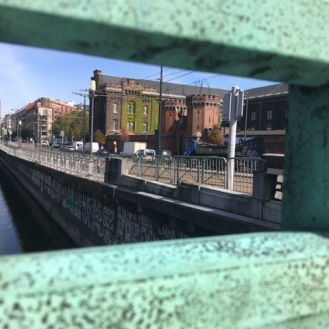